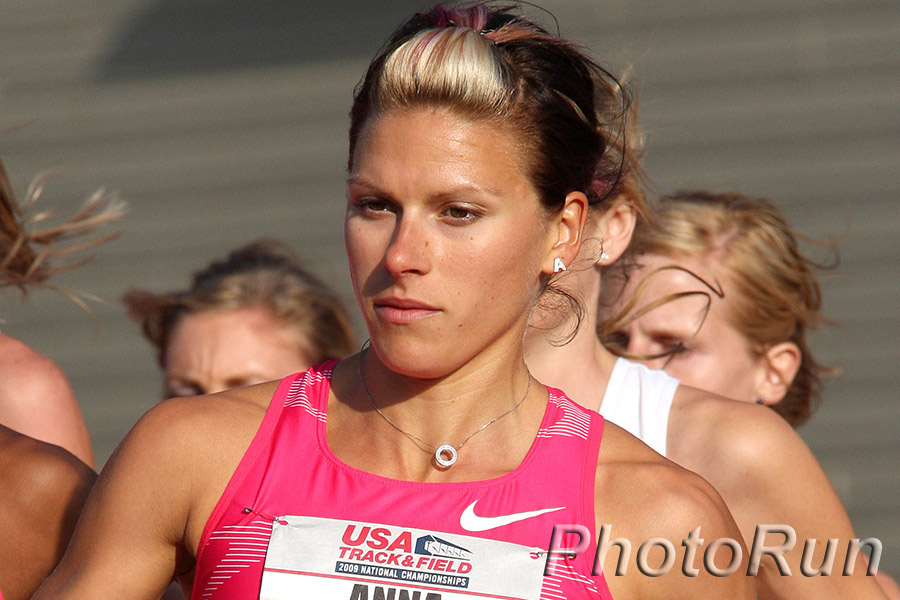 Raised in rural Greenwood, Maine (population 802), where “people thought I was nuts running all
the time,” Anna was state high school champion in cross country and track. She was also a shooting guard on the basketball team, good enough to be recruited by a couple of Division III colleges. Track was her first love, though (“Plus I’m 5-3, what am I going to do in basketball?”) so it was off to Brown University to run track. A 2006 Brown graduate with a degree in environmental studies, Anna ran her first steeplechase as a junior, filling in for an injured teammate on just two weeks of training. She broke the school record in her first race. By the time she was finished at Brown, Anna would hold 10 school records and was named 2006 All-Ivy First Team in athletics.

It was in her final outdoor season of eligibility, which she used at the University of Michigan while earn- ing a master’s degree in sports management, that Anna really came into her own. The new Wolver- ine broke the collegiate record in the steeplechase on her way to winning the 2007 NCAA title. Anna was named Big Ten Track Athlete of the Year after winning titles in the steeple, 1500m and 5000m and the top female performer at the Penn Relays for her contribution to NCAA records in the 4x800m and 4x1500m relays. Anna was also honored at Michigan’s 2006-2007 Female Athlete of the Year.

In 2008, Anna won the US Olympic Trials in a then-American Record time of 9:27.59. In 2009, Anna was undefeated over 800m and ended the year as the third fastest American ever over 1500m. By the end of the season, Anna had earned world rankings in three different events.